In addition to the new mechanics and interactions, catch up on the latest releases of the Sword & Shield block's 2022 main expansions in Pokémon TCG.

Hello, I'm Rodrigo, bringing information and news about the world of Pokémon TCG. In this article, we are going to discuss the last two base expansions of the Sword/Shield block: Lost Origin and Silver Tempest.

This expansion will be out in early-September (09/09/2022 to be more precise), with the Japanese expansions

, and some unreleased cards in Astral Radiance

set in the Japanese sets). There will also be some Trainer Gallery cards like Leon's Charizard, Pikachu-V and Pikachu-VMax with Red (all from Vivid Voltage) and Eternatus V and Eternatus VMax (from Darkness Ablaze) cards with President Rose. In the case of Eternatus VMax, it's the most beautiful card in the Trainers Gallery, in my opinion, which should be the definitive Pokémon illustration standard.

With that, this expansion in the western version (which we must consider as our reality), will count in total with

in the base expansion and

30 cards in the Trainers Gallery

. Remembering that it has delayed expansion cards from Darkness Ablaze, Vivid Voltage, some Full Arts from Shining Fates

, and two Black Gold Full Art cards such as of numbers 29 and 30, being Pikachu VMax and Mew VMax. You can access the english list of cards here

, with information from the complete lists with the translations of their attacks, abilities, arts and general information.

For those who are new to the Pokémon TCG, they may even think that this mechanic is new, surprising and daring, but for those who have been around for a while (like me), it's not quite like that: the Pokémon Company recycled these gameplay concepts again for the current format because of the collection's mascot,

, the Pokémon that represents antimatter and the antithesis of Palkia and Dialga regarding the dimension in which Giratina lives where the rules of space/time don't apply. I will tell you a little about the story. With that, we have the

mechanic, implemented in 2009, in the

Diamond/Pearl block, in the Platinum

expansion, where this "area" is a type of non-recyclable "discard pile", where certain Trainer cards (Supporter or Stadium) or Pokémon that had any abilities or attacks with effects that synergized with the

could synergize and combos with this mechanic. Here are examples of Giratina in this Diamond/Pearl block: Platinum:

After this dominance in the Platinum expansions (which were subdivided into Platinum: Rising Rivals, Platinum: Supreme Victors, and Platinum: Arceus), this mechanic reappeared in the

. This brought back this mechanic, with cards like Absol Prime, Gengar Prime, Mew Prime, and Magnezone Prime.

And in the last expansion of the HG/SS block, the

, in addition to the Lost Remover CL 80 card, we had a completely broken Stadium card in the format:

After a long time, skipping the Black/White and X/Y blocks, we had the mechanics return only in the Sun/Moon block, in the

expansion, and again, with the signature presence of Giratina, but with special cards with their own

that gave them characteristics, the so-called

cards. Given these examples, within the expansion we had the aforementioned Giratina ◇ UPR 58, Darkrai ◇ UPR 77, Solgaleo ◇ UPR 89, Lunala ◇ UPR 62 and the Trainer Supporter Cyrus ◇ UPR 120 at the premiere of this expansion.

And in the others that happened before the Tag Team GX mechanics in Sun/Moon became more evident in the last expansions, from

(when the Tag Team GX mechanics debuted), there was a predominance of

. Here below are examples of what they played at the time:

And now, with the launch of the new expansion in September, we will return with recycled mechanics to close out the second half of the year.

What to expect from the format's decks?

And giving a hook on the mechanics, let's remember the mascot of the expansion,

, and he has his own deck built, which maybe can take a bigger hype for the competitive as well as

with the past expansion,

. We can assume that it will be just as expensive or that it can also create as high a hype as was put on

. However, based on data from Japanese research sites, forums and TCG groups about Giratina's deck, it is doing well and exceptionally, and we will break down some cards that synergize with

. Here is an example of one of the decks with it: Giratina-VStar, as the deck's main attacker, has two attacks: Its first attack,

, for a plant energy, a psychic energy, and a colorless energy, does 280 damage and also puts two energies that are attached to your Pokémon to the Lost Zone. As for its second attack, being a V-Star attack,

, for a plant energy and a psychic energy, you can only use this attack if you meet the minimum requirement of having at least 10 cards or more in the Lost Zone. The opponent's Active Pokémon is automatically Knocked Out (remembering that you can't use any Ability or VStar attack more than once in the game). And with this system, we have Trainer cards that play with Giratina, such as: 1)

: that if you have at least 10 cards in the Lost Zone, damage from Pokémon-V against yours on the next turn is reduced by 120 points. 2)

: which puts any stadium or tool in play (yours or your opponent's) in the Lost Zone. 3)

: which can only be played if there are at least 7 cards in the Lost Zone. You can search two different Basic Energy cards from your deck for your Pokémon in any way you like. We have other decks (which we'll cover in the future) about potential uses like

With confirmation to release on November 11, 2022, this expansion is the last of the blocks in the sense of bimonthly or quarterly base expansions that take place periodically throughout the year. It will include the Japanese expansions

, which will be released on September 2, 2022, and it is very likely that they will pick up another expansion to gather and create the definitive system of releases or reuse other cards not released in the Sword/Shield block. It is still a mystery how to determine the number of cards that will come in the expansion with such precision, but the promise of the Pokémon Company International is that there will be more than 190 cards, within the official website. They also say that it will contain 6 new VStar Pokémon, more than 30 cards from the Trainers Gallery and 3 new Radiant cards, which are: Radiant Alazakam, Radiant Jirachi and Radiant Tsareena. (Fun fact: It's funny to note that the Silver Tempest logo refers a lot to the typography and color style of the old Ruby/Sapphire: Unseen Forces expansion, precisely because of the coincidence that Lugia and Ho-Oh will be present in these two expansions).

- During your turn, when Jirachi is knocked out by an opponent's attack, you search your deck for three cards and put them in your hand and after that, shuffle your deck. Attack:

- During your turn, you can move two damage counters from one of your opponent's Pokémon to another. Attack:

- During your turn, you can heal 20 damage from all your Pokémon in play. Attack:

(one grass energy and two colorless energies) - Deals 90 base damage and removes all special conditions from this Pokémon.

With the extended durability of the entire block in a single year, as we already mentioned the rotation in this article

, we will have almost the second half of 2022 to contemplate possible combos with new cards and a fair dynamic within the proposed in the block for the Standard format. There will still be a few more regional events and the International, which could open up possibilities with these new decks that are to come and that may be highlighted in this end of the current format.

See another amazing and curious deck from Hisuian Electrode-V, which for no energy at the ... 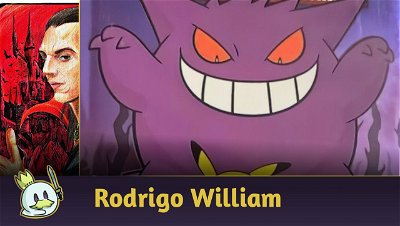 Pokémon will have Halloween-themed cards in 2022

Learn more about the Halloween themed cards for 2022 announced by Pokémon Company Internat...