Follow this deck using another Amazing Rare card from the Shining Fates collection and see the potential of Yveltal, the Pokémon that represents Death in Pokémon mythology.

Hello everybody. I'm Rodrigo, bringing more information, tips and curiosities from the world of Pokémon TCG. Today we will elaborate on another possibility of Amazing Rare cards from the collection Shining Fates

for the Standard format. In the last article about these Amazing Rare cards, we talked about Reshiram

with the "Glass Cannon" deck and now, we'll talk about Yveltal, with the destructive power of what we can say has the "touch of death".

Yveltal, the Pokémon with the "Touch of Death"

Among these 3 Amazing Rare cards released in Shining Fates, Yveltal SHF 46 is another one with very interesting potential, even with a high cost of energy to fulfill. The

attack (for one dark energy, one fire energy, one psychic energy, and two colorless energy) is an attack that knocks out the opponent's Pokémon, no frills. And with the release of the “staple” card Dark Patch ASR 139, which can easily help to energize dark energies. So let's get to know the deck.

The script of this deck is simple, and it is similar to the strategy used with the Centiskorch “Deck Out”

that I posted in July about using the card Diancie ASR 68 to hold the game of your basic Pokémon, so they don't suffer twists when the opponent plays that Boss's Orders RCL 154 to spoil your strategy. So, I will continue to point out the step by step in a didactic way:

1) Play as many Diancie ASR 68 as possible, because of its

ability, preventing any Trainer-type Supporter card effects that affect any Basic Pokémon on your field. That is, preventing the opponent from using a Boss's Orders RCL 154 to knock out your Yveltal SHF 46 or your Squirtle PGO 15, which are key pieces for your game performance. 2) Then, as soon as possible, place

the Squirtle PGO 15 to guarantee in the other turn your acceleration in the evolution to Blastoise PGO 17 with the use of the Rare Candy SSH 180 , along with putting at least 1 Yveltal SHF 46 in the same evolution turn for Blastoise, to have the availability to enjoy Blastoise's passive, the

, where you connect up to 6 energies to your Pokémon, and if you do, your turn ends. It's to use this skill on your Yveltal Amazing Rare, as it requires 5 energies to attack.

3) Once you have at least 1 Yveltal SHF 46 guaranteed in the previous turn, place a second Yveltal, as this will ensure the synergy of hitting with it constantly and always being prepared, as it is a “heavy” Pokémon in energy cost, in addition to being a good attacker against two-prize to three-prize opponents. 4) For the deck's draw power, we have Crobat V DAA 104 as something punctual, with its

ability, where if it is put from your hand to the bank, you can draw cards until you have six in your hand. The other draw resource point is Bibarel BRS 121 with its

ability, which you can draw cards until you have five in your hand. The ideal is also to have two Bibarel BRS 121 in case any Diancie ASR 68 is knocked out and guarantee more draws in your game and boost the search for energies.

Now let's talk about the Trainer cards in the deck:

of the format, discarding your hand and drawing 7 new cards. This is the game's great draw power potential, streamlining your resources to discard a bad hand. But you should be

as this deck doesn't have a lot of energy recycling or Pokémon recycling if they are knocked out, so think very wisely about when to use the card. - Irida ASR 147 is good for fetching Blastoise PGO 17 and Rare Candy SSH 180 thanks to its effect of fetching a Water Pokémon in your deck and a Trainer card of any type and put it in your hand. - Boss's Orders BRS 132 is precisely to pull a key Pokémon from the opponent to attack Yveltal, recommended to catch the Pokémon-V of the current format to get as many prizes as possible in a short time. - Raihan EVS 152 is your energy “recycler” and resource acceleration, as it can only be played on the turn that if by chance, your Pokémon was Knocked Out last turn, you can turn on a basic energy from the discard pile (preferably Fire or Psychic) ​​to one of your Pokémon and then look for

any card in your deck and put it into your hand

, looking for Twin Energy RCL 174 to power up some Yveltal or a Boss's Orders BRS 132 in an ideal turn to end the game, depending on the situation.

- Ultra Ball BRS 150 here is for the filter of Pokémon in the deck, with the cost of having to discard two cards from your hand to make its effect, and of course, the priority is to discard the dark energies to combine the system using Dark Patch ASR 139 and ensure better filtering of the deck. - Quick Ball FST 237 has the same kind of reasoning as the Ultra Ball, but only needs to discard a card from your hand to get a

. And of course, discarding those dark energies that would be ideal to pay the cost, in addition to creating the combo with the stadium Training Court RCL 169 which is another possibility for rescuing these energies with tribute (but be careful, as there are few basic energies in this deck). - Level Ball BST 129 is just to catch Pokémon with 90 HP or less, like Squirtle PGO 15 or Bidoof BRS 120.

- The Rare Candy PGO 69 is essential to use in decks that need stage 2 Pokémon to evolve and speed up the process, and since Blastoise PGO 17 is

to have in this game, it's more what a must to have this type of card in the deck to accelerate Yveltal's energies. Let's remember that this decklist doesn't have a lot of Blastoise, just 3-2 and no Wartotle, so it's a delicate matter. - Dark Patch ASR 139 is one of the

most important Trainers in this deck

, as he is the one who will certainly guarantee the recycling of dark energies for your Pokémon that are on the bench, of course, the Yveltal SHF 46.

- Air Balloon SSH 156 is to grant retreat to your Pokémon. It's ideal for primarily on Bibarel BRS 121, if the opponent target them with Boss's Orders RCL 154 and locking them as active Pokémon and having no way to retreat, other than manually paying for energies that could be spent on the turn powering Yveltal SHF 46.

- The deck's only stadium, which consists of once per turn, you and the opponent take a basic energy from the discard pile into your hand, which is precisely the recycling you have to rescue fire and psychic energies from the deck.

This is a deck with high destructive power. Any card that knocks out

without limiting the opponent's life, whether 300 or 340 HP! Still, it's better against decks of ultra-rare cards clogged up in the full Pokémon-V format, which is Yveltal's favorite feast.

- It's hard to face one-prize decks, that is, without the ultra-rare cards in the format. As Yveltal is asking for five energies (three of them basic and two any, which forces the use of Twin Energy RCL 174), it doesn't pay much to face them. - Control Decks, which can delay your resources for game progression. - Decks that make you discard your energies in a way that doesn't recycle them anymore (like the Lost Zone) or that discard your only two copies of Stadium Training Court RCL 169, without them to recover your base energies, makes your game difficult by 70% or more. - Multiple knockout strategies like “Spread Sniper”, in case they can destroy the Squirtle PGO 15 and Bidoof BRS 120 with simpler “sniper blows” or more complex and wider blows like

, or even decks with damage counters (so-called “indirect snipers”) like

It's an exceptional deck to catch people off guard who like to use high-damage next-gen decks with ultra-rare Pokémon, meta decks like

and among other Pokémon-V (either VMax, VStar, VUnion, etc). However, it is useless against single prize decks, which doesn't have many responses and many consistencies to last for a long time in a game, leading to many weaknesses in the long run. Until next time! 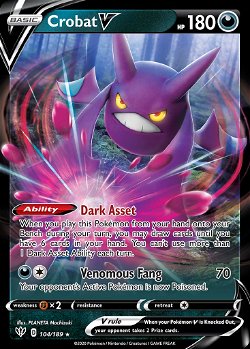