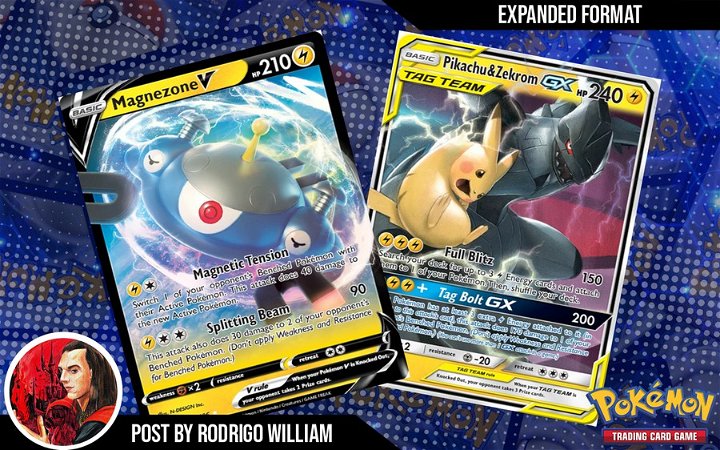 Get to know a Pikachu & Zekrom Tag Team with Magnezone-VStar and Jolteon-VMax deck build for the expanded format, with its aggressive sniper style and item searching!

Hello, everybody. I'm Rodrigo, bringing news about Pokemon TCG and its vast content. Carrying on with the Expanded format, we'll talk about an electric deck focused on sniper damage which is aggressive, versatile, and as a bonus is able to look for items and retreat for free.

Boltund V is vital in order to speed up electric energies in your matches. The ideal thing to do in this deck is that you are second to go. With that, the main form of speeding up your resources is to use its first attack,

Jolteon's line is good as it is a zero cost retreat Pokemon, dynamic to retreat without losing energies. But the main focus here is to speak about its VMax form, which is what interests us. -

: (for one electric energy and a colorless one) deals 100 damage and 100 more damage to one of the opponent's benched Pokemon, being a very fast, aggressive and strong sniper.

Magnezone's line is good because both in its basic and VStar form it deals sniper damage: -

: forces a benched Pokemon to go into the active position and if they do, they take 40 damage. (In that, you slowly start to chip away at it, spreading all these damages, which helps you later to deal a sniper attack, in case it retreats). -

: deals 180 damage and even searches for the two top Item cards in your deck, reveals them, and places them in your hand (and the good thing is that by searching for these items, you can get the Electropower LOT 172a card, so you can increase your damage by 30 points for each use). -

: deals 90 damage to two benched enemy Pokemon (you can't use more than one VStar Power during the game, be it an ability or an attack).

: deals 150 damage and also recharges 3 electric energies from the deck to one of your benched Pokemon (the good thing is that it is possible to use Electropower LOT 172a to increase your damage 30 points for each Pokemon). - Its GX attack,

: deals 200 damage, but if you pay an additional cost of three more electric energies, besides it dealing 200 damage, it deals 170+ damage to one of the opponent's benched Pokemon.

- Zeraora-GX LOT 86 is a big highlight due to its ability,

That is so because we have its GX attack which is a big help,

in which you recycle up to 5 electric energies from the discard pile to any Pokemon in play you'd like (the ideal thing to do here in these cases is to recharge Magnezone VStar and Jolteon VMax rather than Pikachu & Zekrom TT-GX, as you can't use more than one GX attack per match, so it's not worth it). - Dedenne-GX UNB 57 has the

ability, which allows you to discard your whole hand and draw 6 cards. - Tapu Koko ◇ TEU 51 has the

Dance of the Ancients

ability, which states that if it's played from hand and placed in the bench, it searches for two electric energies from the discard pile and attaches them to two of your benched Pokemon. If you do so, it is sent to the Lost Zone.

- Electropower LOT 172a is your damage amplifier: when using it, until the end of your round, before attacking, your electric Pokemon get 30 more damage against your opponent's active Pokemon (this effect can stack). - Electrocharger TEU 139 is meant for you to recycle two cards from Electropower LOT 172a, in case you get head twice so the effect can happen. - Telescopic Sight VIV 160 when equipped to a Pokemon, deals 30 more damage to targets on the opponent's bench which are GX or V Pokemon in general. - Ordinary Rod SSH 171 is meant to be a recycle engine for basic energy and Pokemon in your discard pile, and it allows you to chose one of these two options or both, which are: 1) Recover two Pokemon from the discard pile and place them into your deck. 2) Recover two basic energies from the discard pile and place them into your deck.

- Thunder Mountain ◇ LOT 191 is useful to scrape one energy off the attack cost of one of your electric Pokemon. Example: if Pikachu & Zekrom-GX TEU 33 needs to attack with exactly three electric energies, with this stadium, with only two energies it can attack already. - Stormy Mountains EVS 161 is useful to search in your deck for basic electric or dragon type Pokemon in your deck and place them in your bench, and of course we will search for electric types. This way, your setup will be focused on placing your main attackers on the bench as quickly as possible.

We have an advantage against water Pokemon. Besides that, this deck has mainly 3 advantages:

1)Sniper damage, which Jolteon VMAX EVS 51 alone deals 100 damage to the active and bench spots. 2) Magnezone VSTAR LOR 57 with its versatility also needs to deal these sniper damages and search for items such as Electropower LOT 172a to increase damage and Telescopic Sight VIV 160 to target your opponent's GX and V Pokemon, and can also be applied to Pikachu & Zekrom-GX TEU 33 in terms of sniper damage and fluid charging; 3) Mobility with zero cost retreats thanks to Zeraora-GX LOT 86 and its ability.

Electric types' weaknesses are the fighting type, so decks focused on this archetype will cause you a lot of headache. It is also a bit complicated to deal with decks that use cards that lock down Pokemon abilities with Rule Box, such as the Path to the Peak CRE 148 card, or that use any Pokemon that serve as "Bench Protectors" such as Manaphy BRS 41, Mr. Mime BKT 97, Mr. Mime PLF 47 and Mew UNB 76 to prevent your sniper damages.

It is a simple deck, practical in its structure and conception, and quite versatile in terms of damage, which is something very good that can make your matches quite dynamic. If you start out with an explosive hand early on, it will be a constant assault that will hardly be defended by Ultra Rare decks that need a lot of energies to face it head on, such as Charizard Fire Box decks or Water Box, such as Blastoise's. So, I would like your opinions regarding my deckbuilding. Which are your expectations? Would you change something to make it better? Make yourself comfortable in the comment section and tell me your suggestions. See you next time! 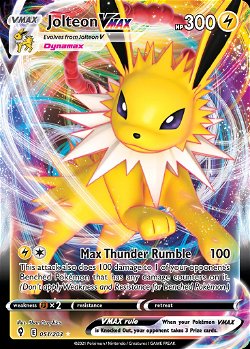 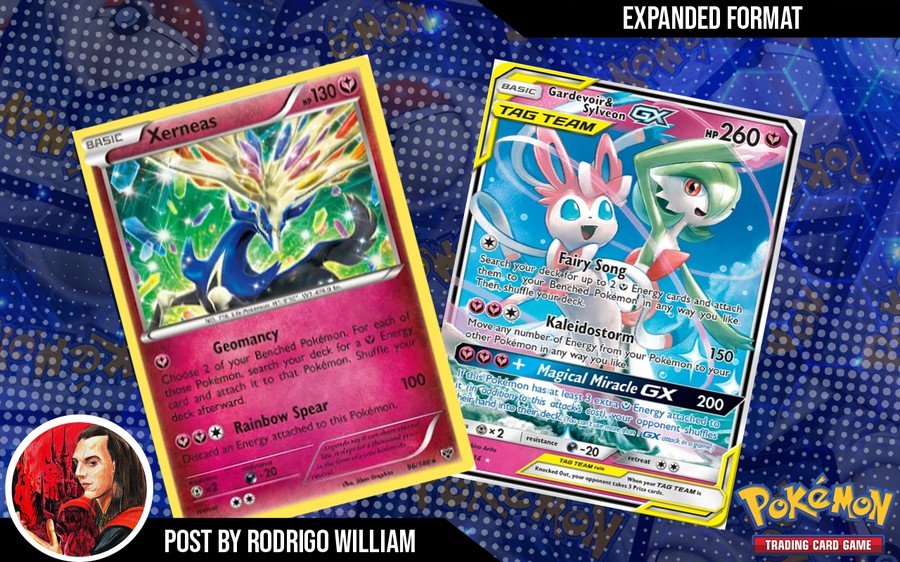 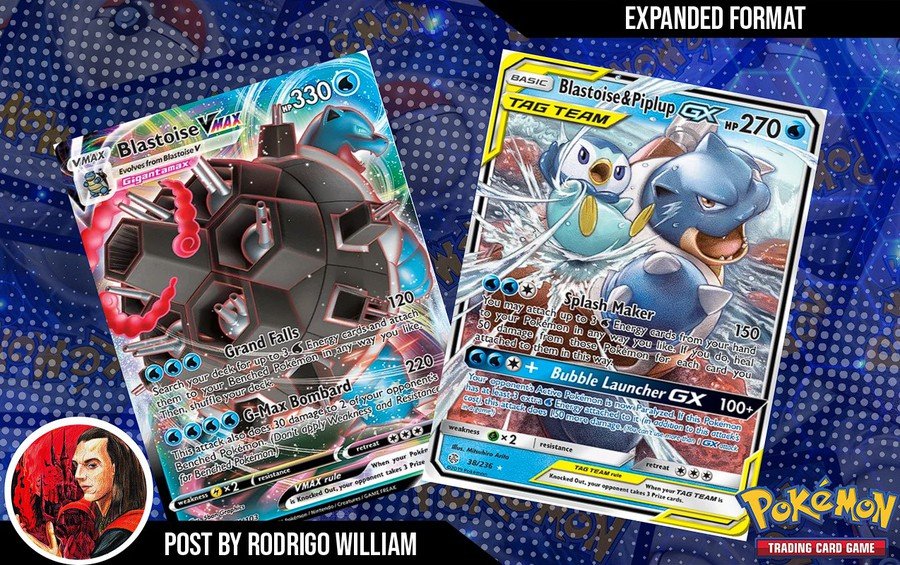 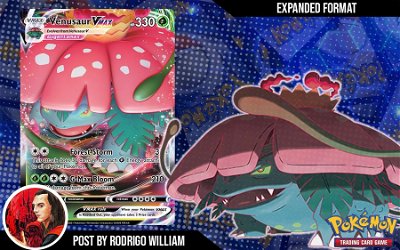 Discover how to build the Venusaur VMax deck for the Expanded format, picking up better re...