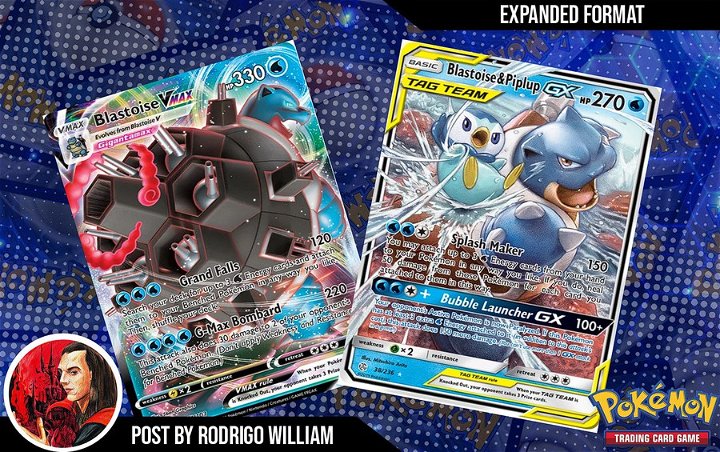 Get to know a Blastoise VMax and Blastoise & Piplup Tag Team deck build for the expanded format, which has fast charging and is able to deal sniper damage to the opponent's bench.

Hello, everybody. I'm Rodrigo, bringing news about Pokémon TCG and its vast content. Carrying on with the Expanded format, I had posted about the Kanto starters using just their VMax form cards. In this article, I will bring the union of the current mechanic with Tag Team GX's last mechanic and the recent mechanic, the VMax cards in general. And today, I will talk about Blastoise VMax with Blastoise & Piplup Tag Team-GX.

This Pokémon's advantage is its fast charging and ability to deal sniper damage to the opponent's bench:

, for just three water energies, deals 120 raw damage and also searches for 3 water energies in your deck and attaches it to one of your Pokémon any way you'd like (which is quite an energy speeding!)

, for just four water energies, deals 220 damage and chooses two Pokémon from the opponent's bench to deal 30 damage as a sniper.

As Blastoise & Piplup-GX CEC 38 is the Tag Team-GX class attacker, it fulfills two really nice roles in its attacks, such as the healing through water energies that it can move and the additional damage and paralysis effect:

: deals 150 damage, and it moves three water energies from your hand to one of your Pokemon, and if you do, you heal 50 points of damage for each energy that was attached this way. Its GX attack,

: deals 100 damage and makes the opponent's active Pokémon paralyzed. But, if you have three more water energies to pay the normal cost of the attack, you deal an additional 150, which means, it adds up to 250 damage and you can still cause the paralysis effect!

, which makes you discard an energy card in your hand to draw 2 cards from the top of your deck. Besides that, it serves as a sniper attacker with its

, in which for two water energies and a colorless one, it deals 90 damage discarding two energies from it, so you can hit two enemy Pokémon. - Volcanion ◇ FLI 31 has

, which makes you, at least once a turn, able to discard one water energy from your hand to pull an opponent's benched Pokemon into the Active position, practically like a Boss's Orders RCL 154. Its attack is also useful to fulfill the sniper role, as it deals 100 damage and 20 damage to all benched Pokémon. - Lumineon V BRS 40 has

, which means if it is summoned from your hand and placed on the bench, it searches for a Supporter card in your deck. It is practically what Tapu Lele-GX CEL 60 used to do in the

set and Jirachi- EX PLB 60 did in the

era, only it's for the water archetype, which can be easily filtered for in searches with the use of Irida ASR 147 or Dive Ball PRC 125. Besides that, it can be an attacker with its attack

, dealing 120 damage and it and all cards attached to it go back into your deck. - Blastoise BCR 31 has

, which makes you move water energies from your hand to your Pokémon

in any way you want

thing. In this "supporting" sense, it is the most important Pokémon from this list.

- Irida ASR 147 is useful to search for a water Pokémon and an Item card in your deck, which makes it easier to search for resources, be it searching for

or even for the recursive Pokémon you need to setup your game, as in

to combo the following round with the help of a Supporter, or

for mobility, etc. Besides all of that you're also getting Items, such as

and others that you might need in a precise moment in the game, because of their importance. - Nessa VIV 157 is a 4 card recycle in a water Pokémon and water energies from the discard pile to your hand combination. - Archie's Ace in the Hole PRC 124 is useful to combo with Blastoise BCR 31, as the card has as its effect that it needs to be played in case it is the last card in your hand. If you do so, you place any water Pokémon card from the discard pile to your bench and then, draw 5 cards. And so that Blastoise BCR 31 is used as discard fodder, we have Battle Compressor Team Flare Gear PHF 92, in which it discards 3 cards you intend to filter from your deck, so they will go to the discard pile, completing the combo with Archie's Ace in the Hole PRC 124.

- Dive Ball PRC 125 is the Pokeball put in your deck exclusively to search for water Pokémon, regardless if it's basic or an evolution. It simply searches the whole archetype, which is wonderful. - Battle Compressor Team Flare Gear PHF 92 enables you to search for 3 cards in your deck and send them to the discard pile. It is clearly and solely meant to cause Archie's Ace in the Hole PRC 124 effect with Blastoise BCR 31. - Trainers' Mail ROS 92 is an item card that allows you to search the 4 top cards in your deck for any Trainer type card, choose one of them, reveal it to the opponent and place it in your hand, then, shuffle your deck. - Capacious Bucket RCL 156 is useful to search for two water energies in your deck and place them in your hand. - Switch Raft DRM 62 is useful as an enhanced

for the water archetype, that by switching a Pokémon, it makes it heal for 30 points of health, which prolongs the Pokémon's life. It matches the stadium we'll talk about below.

- Rough Seas PRC 137 Stadium is useful to heal your electric and water type Pokémon 30 points of damage in between rounds.

We have an advantage against fire type Pokémon. Though it doesn't deal a lot of damage directly like Charizard VMax, which deals 300 damage, even though it only hits 220 damage, Blastoise VMax makes up for it with its sniper damages alongside Volcanion ◇ FLI 31 and Radiant Greninja ASR 46. Besides that, we have a deck that besides the sniper damage matter, we have a hybrid architecture of healing between the Pokemon, with the following key parts: Rough Seas PRC 137 Stadium, which heals practically 30 damage a turn, plus the rafts Switch Raft DRM 62 which also heal by 30 points Pokemon that you retreated to the bench, and not to mention Blastoise & Piplup-GX CEC 38 itself, which heals up to 150 damage.

We are talking about 210 damage being healed at once, combining all these cards together!

Electric type weakness is a pain, even more so because in this decklist we don't have Weakness Guard Energy UNM 213, so against this type of archetype, matches will be complicated. These type of decks include: Pikachu & Zekrom-GX TEU 33, Raichu & Alolan Raichu-GX UNM 54, Boltund V RCL 67, Vikavolt V DAA 60, Raikou V BRS 48, Tapu Koko VMAX BST 51, Dracozolt VMAX EVS 59, Silver Tempest's own

(promotional cards from boxes which are only available in the U.S.A, Canada and United Kingdom), considered Ultra Rares. As for "Single Prize" decks, our fears are decks with Raikou VIV 50, Zeraora UNB 60 with Magnezone FLI 36 synergy as its charger, and Raichu CEC 67 in the

deck. It is also tough to deal with decks that use cards that can lock down your Pokémon's abilities, such as the Path to the Peak CRE 148 card or that use any Pokemon with the "Bench Protector" role such as Manaphy BRS 41, Mr. Mime BKT 97, Mr. Mime PLF 47 and Mew UNB 76 to prevent snipe damage.

It is a reasonable deck, but for those who like water Pokémon, such as Blastoise, you will like this new interaction among cards that have fast charge with

thanks to Blastoise BCR 31, even more so as this deck has a hybrid healing and sniper damage role, being versatile in many moments. So, I would like your opinions regarding my deckbuilding. Which are your expectations? Would you change something to make it better? Make yourself comfortable in the comment section and tell me your suggestions. See you next time! 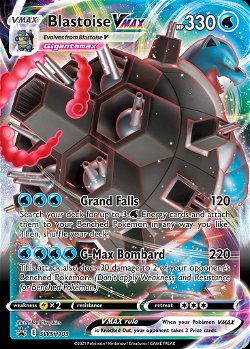 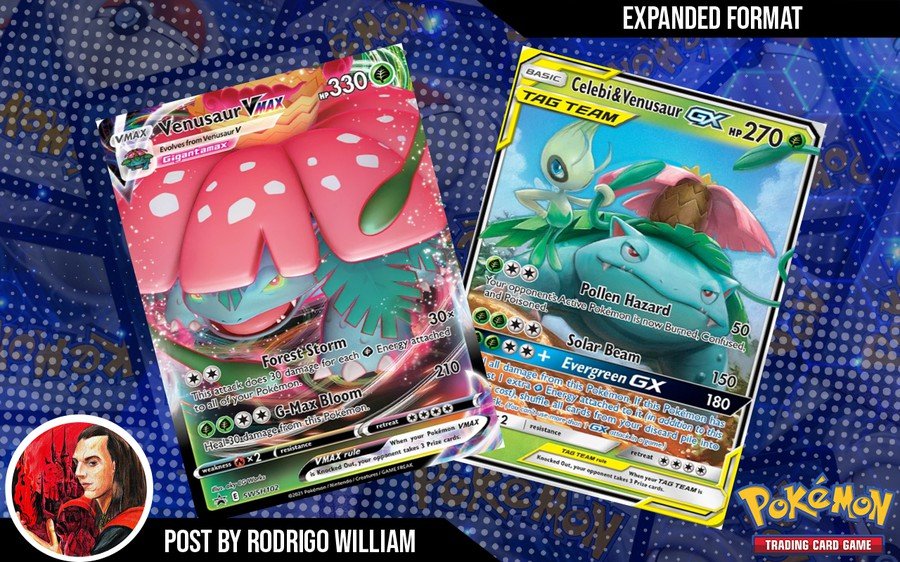