Check out the deck that grabbed a Top 8, in third place, in San Diego's Regional, through the player Grant Shen, a Duraludon-VMax deck, which returned at full speed against Lugia VStar's metagame!

Hello to all. I'm Rodrigo, bringing news about Pokémon TCG and now with the news of the first western regional, in San Diego, California (USA), we'll talk next of other players who got their Top 8. Today is Grant Shen's day, who got third place with the Arceus VStar and Duraludon VMax deck, which now, with the constant frequency of Lugia VStar, Duraludon VMAX has more fuel and strength lately, as it is a natural counter to special energies.

Arceus VStar: a Hybrid of Attacker and High-Value Support Roles

: you can search your deck for any two cards you'd like and place them in your hand (you can't use a VStar power more than once in the entire game). It's a support/attacker Pokémon which can quickly boost your V type Pokémon, and it also has a very strong ability to search specific cards in your deck, which helps out filtering it to many purposes. The sky is the limit, as there may come up situations in which you'll be using this ability to look for a

to drag a Pokémon from the enemy bench, or look for a

to sabotage the enemy hand, or for Poké-Balls, so you can search a Pokémon that you need to build your setup, etc.

: this Pokémon doesn't take damage from Pokémon which have special energies attached. 2) Attack -

(F)(M)(M): deals 220 damage and this attack's damage isn't affected by any effects on your opponent's Active Pokémon. It's more than obvious that it's the

counter against the Lugia VSTAR SIT 139 deck using Powerful Colorless Energy DAA 176, very common lately. We also have Blissey V CRE 119 which can be disabled by

, besides electric decks that frequently use Speed Lightning Energy RCL 173, such as Vikavolt V DAA 60, Raikou V BRS 48 and Raikou VIV 50. The only real problem is that we have the Mew VMAX FST 114 deck with the use of the Fusion Strike Energy FST 244 energies, which can also hinder

, as the special energy effect can overwrite this Pokémon's ability, as it goes over the effect of annulling

's damage even with the special energy. But that aside,

conquered a lot of space and has become a powerful Pokémon in the recent performances, and will last for a long time until rotation comes in April, in which many special energies will decrease in the format.

- Colress's Experiment LOR 155 is useful to look at the top 5 cards in the deck. You get 3 cards for your hand and the other 2 will be discarded to the Lost Zone. - Single Strike Style Mustard BST 134 is a sort of filter to search for your

in your deck, precisely as it is a

type, which allows you to summon its VMax form directly from the bench, all because this card doesn't specify the type of Pokémon that can be put in your bench, regarding if it's basic or evolution, it just says it needs to be of the

archetype, and you can put it in your bench. - Marnie CPA 56 is a way to sabotage your opponent's hand in case they have many cards in hand. By sabotaging them, you lower their game options.

- Boss's Orders BRS 132 is useful to drag a specific Pokémon from the enemy bench to deal the damage you need for victory, so you can speed up the acquisition of Prize Cards. - Raihan EVS 152 is useful to speed up

's charging, as its energy cost is a bit complicated, and it also counts with resource boosting through the draw of any card you'd like from the deck to speed up any future strategies, depending on the current game state.

- Big Parasol DAA 157, when equipped to a Pokémon, prevents the Active Pokémon's attack effects (effects already existing are not removed and damage isn't considered an effect). Supposing your opponent has performed an effect of the sort "your Pokémon is poisoned",

isn't affected by it. In sum, everything that is in the description of a Pokémon card's attack is considered an "effect", and this tool disables it. - Hyper Potion CPA 54 is ideal to heal

- Training Court RCL 169 is useful to get a basic energy card from the discard pile and place it in your hand. - Crystal Cave EVS 144 is useful to heal 30 points of damage from your electric and dragon Pokémon in play. And, obviously, you'll heal your

- Double Turbo Energy BRS 151 is useful only to speed up

, with the price of two colorless energies which can be paid in the attack's three energy cost. However, this energy takes 20 of your damage when equipped, that means, instead of dealing 200 damage, you deal only 180 damage.

As said above in Duraludon VMAX EVS 123's description, it disables the main decks which use special energies, such as Lugia VSTAR SIT 139 with the use of Powerful Colorless Energy DAA 176, which uses Yveltal SHF 46 and Radiant Charizard PGO 11's line; besides other decks such as Blissey V CRE 119 electric decks that constantly use Speed Lightning Energy RCL 173 such as Vikavolt V DAA 60, Raikou V BRS 48 and Raikou VIV 50.

- Mew VMAX FST 114 decks when they set up a situation that doesn't require the use of special energies as attack cost (though the Fusion Strike energy can get over Duraludon-VMax's ability). - Decks that are quick to attack with a low-energy cost and have constant attacks such as Origin Forme Palkia VSTAR ASR 40 which, for two energies, already deals 260 damage with ease and even the Giratina VSTAR LOR 131 deck which deals 280 damage and the energy cost is basic energies (three energies), so it's quite aggressive.

- Decks that perform item locks, the

types, as this deck uses and abuses

It is a deck that will have a considerable and important amount of weight with this role of disabling special energy decks, until

loses its strength with Powerful Colorless Energy DAA 176 after the 2023 April rotation, and if there are more regionals before that, rest assured this type of reasoning will be present in tournaments quite frequently. You may put any questions in the comment section down below. I will answer and help you in whatever you need! See you next time! 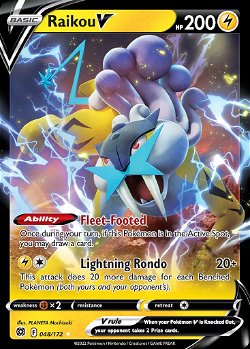